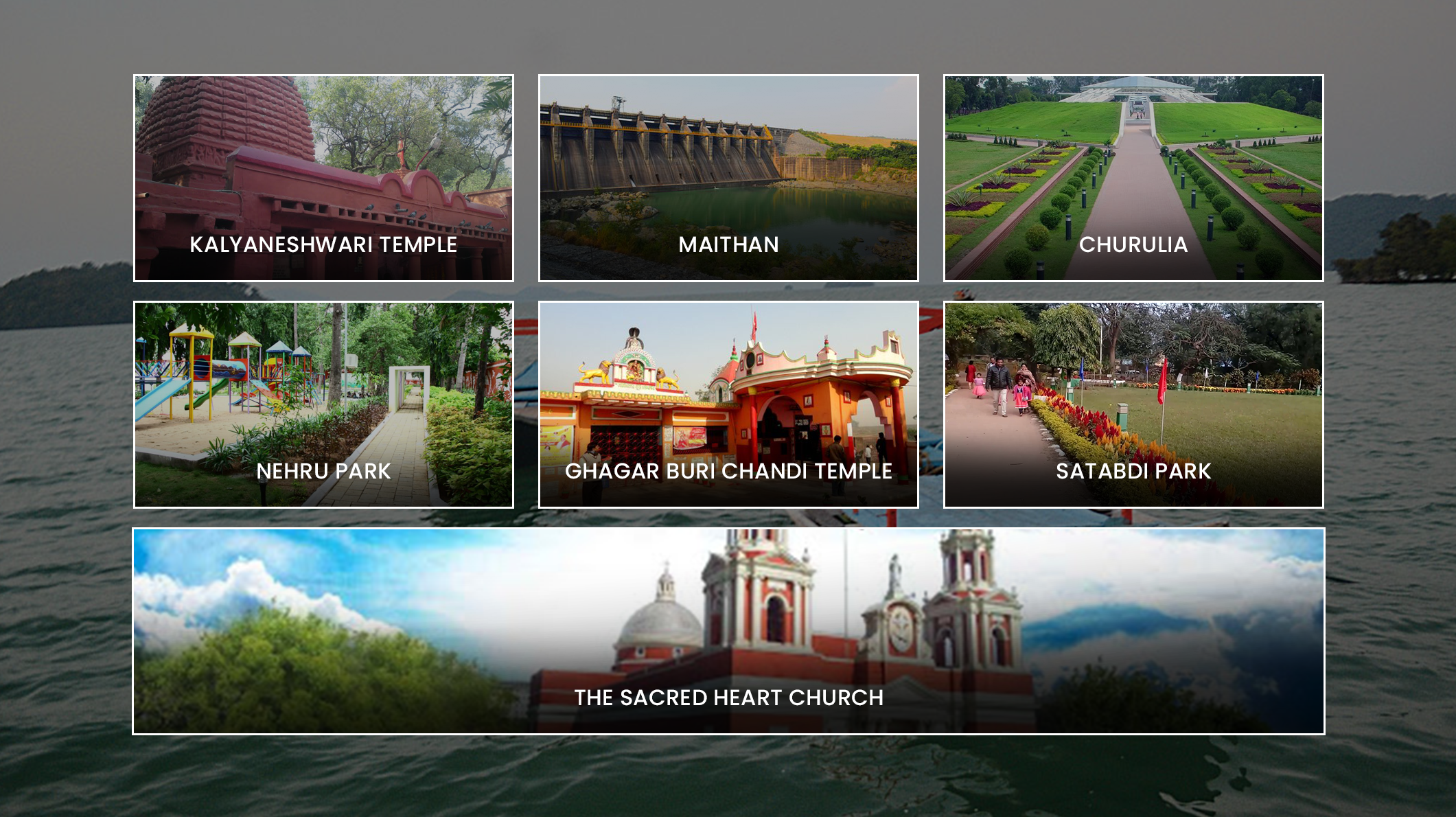 We all love to get away for some time from our monotonous daily routine, even if that is only for a weekend. Moreover, it is also easier to afford weekend tours since they are mostly low budget trips. So if you are looking for places to travel to for a weekend from Asansol, this article will provide you with the best options.

Bankura is a district in the state of West Bengal, located 72 km from Asansol. The place is famous for its terracotta temples, dense forests, hills, and various spots that are rich in greenery. Bishnupur is also a part of Bankura along with Mukutmanipur, located at the confluence of two rivers, Kansabati and Kumari.

Mukutmanipur is famous for its lake and the crystal clear water that works as a mirror for the azure sky right above. The best time to visit Bankura would be October to March since the summers are brutal and not ideal for any kind of outdoor activities.

Also known as the land of temples, Purulia is a favourite tourist destination near Asansol city. It offers an amalgamation of rich tradition along with vibrant natural beauty. Those who love to indulge in the local history and heritage of the place need to visit Cheliama, located in Purulia. It takes you back to the 17th century with its terracotta sculptures and carvings on the temple walls.

Deulghat is another destination for those who have embarked on a spiritual journey since the ancient ruins of temples add to the mysticism of the place. People also indulge in celebrations in the form of songs and dances with the native people and tribes namely Santhals, Kurmis, and Kherias-Sabars.

The months of November and December are particularly favoured by visitors because of the tourism festival named Teesta Tea and Tourism fest. The weather too becomes quite cold and chilly which makes traditional dances around a bonfire a common sight in the evenings.

The distance between Asansol and Purulia is approximately 86 km and months between October and March are ideal for trips.

Birbhum translates as the land of the brave. It is a district in West Bengal, famous for its rich heritage and red soil houses. It is also well-known for Shantiniketan.

Other famous places to visit in Birbhum would be Tarapith, Bakreshwar, Joydev Kenduli, Dubrajpur, Nalhati, etc. The best time to visit Birbhum would be from December to February since the weather remains mostly favourable during these months. The distance to be traversed from Asansol in order to reach Birbhum is 87 km.

Shantiniketan is a quaint little town in Bolpur (Birbhum district) and is an internationally famous spot for intellectuals. It is also fondly known as the Treasure Trove of Novel Laureate Rabindranath Tagore. He was also the founder of the University of Biswabharati along with an Ashram in 1863.

Tagore also became the initiator of BramhoSamaj. The entire campus of Shantiniketan is filled with gorgeous murals, sculptures, and paintings of Tagore, Nandalal Bose, Ramkinkar, and BinodbehariMukhopadhay.

The ideal time to visit would be the months of December, January, and March because of the celebrations such as PoushMela, JoydevMela, and Basanta Utsav.

Asansol is 94 km away from Bolpur and is well connected by roads.

Situated on the bank of River Bhagirathi, Murshidabad is an old city in West Bengal. History stands as proof of its heritage and days of prosperity prior to the Britishers’ shifting the capital of India to Kolkata.

There are relics of the Nawabs’ rule in the form of contributions such as mosques, tombs, and gardens. Industries of embroidery in gold, ivory, and silver along with silk were also set up in the era of Nawabs’ rule.

At present, the city of Murshidabad is known for agriculture, handicrafts, and most importantly- silk.

HazarDuari Palace (A Palace of 1000 doors) is one of the most frequented places in Murshidabad. The name HazarDuari is a literal translation since there are 1000 doors in the palace out of which 100 are fake. It constructed by Duncan Mcleod under the supervision of Humayun in 1837. It has now been transformed into a museum and is regarded as one of the biggest site museums of the Archeological Survey of India.

Other important places to visit while being in Murshidabad are Bara Imambara, Madina Mosque, NowbatKhana, Clock Tower, Zurud Mosque, etc.

It roughly takes 5 hours to reach Murshidabad by road.

Sundarban is the world’s largest delta as well as the largest mangrove forest. One of the biggest pride of West Bengal, Sunderban is an ecosystem on its own and gets its name after the abundance of growth of Sundari trees.

The area of Sundarban is spread over 54 islands and two countries, India and Bangladesh. It is also the only existing habitat of the Bengal tiger, making it a site of the tiger preservation projects. The area is surrounded by River Muriganga on the west while Harinbhaga and Raimangal flanks on the east. The biosphere reserve has also been recognised by UNESCO in 2001 while the core area of Sundarban’s tiger preservation project was deemed as a World Heritage Site by UNESCO as early as 1987.

Visitors can take a trip to Sundarban from October to March but the best time to visit is between December and February since the humidity decreases to some extent.

The distance between Asansol and Sundarban is 270 km. There is no direct mode of transportation that will take you into the heart of Sundarban. The closest railhead is Canning station. Since the area is surrounded by rivers, you also have to take boats at various points of the journey to reach Sundarban.